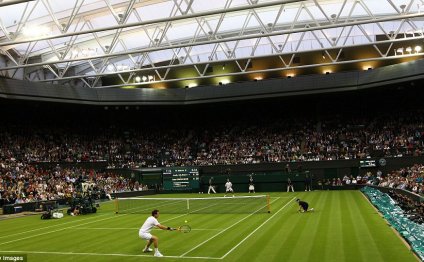 Up on the Hill and in living rooms around the country, things are different. But in the rarefied air of Centre Court it is still the appearance of the Fed Express, serving here like a train, that makes many of the pastel-clad masses go weak at the knees.

Centre Court at Wimbledon, for all its maddening peculiarities, can usually be relied upon to fuel Murray with the self belief that allows him to play his best tennis. There is but one caveat. When he is playing Federer, all bets are off. Even during that tear-soaked 2012 final defeat, when the roof came over and Federer turned the screw, the vocal support was often fairly evenly matched.

The story of Murray’s relationship with middle England is well worn and does not need repeating. Suffice to say he won them over on his own terms and his 2013 victory has enshrined his immortality. Whoever they were backing, it was intense. And so very tense. t felt like a final. The woozy, boozy bonhomie and stifling heat of the first week had given way to a brittle, cool breeze and a huge sense of occasion.

And no point more so than during that impossibly tense, epic 10th game of the second set. This was tennis on the edge, of impossibly high quality with zero margin for error. It went on for 17 heart-stopping minutes, both players went through two rackets and Murray saved five set points before finally prevailing.

Concertinaed into that 17 minutes was a mini sporting epic all of its own. For the first time, Murray began to work the crowd, engaging them, shaking his fist, exhorting them. It was street fighting scrapping of which Sir Alex Ferguson, looking down from his perch in the Royal Box alongside Thierry Henry, would have heartily approved. The often reserved Centre Court crowd momentarily forgot their reverence for Federer and responded in kind, yelling him on, willing him back into the match.

Yet when Federer went on to ultimately clinch the set two games later, they made plain their acclaim for him too, touched to be in the presence of his genius. There was a couple of Fed fanatics decked out all in red to the right of the scoreboard but most of those watching were metaphorically wearing both bandana and baseball cap. “It definitely also gave me a lift to see that the crowd was actually evenly split, ” said Federer afterwards, speculating that their affection had grown as he had entered the latter stages of his career.

There was also an all-prevailing sense in which even the entitled denizens of this famous sporting arena knew they were hugely privileged to be here, on this day, watching these two players. Following an incredible rally in the fifth game, where the pair exchanged half volleys on the approach before Federer won the point with the cutest of angled slices, the crowd audibly groaned at the quality of the banquet being spread before them.

During the first set in particular the quality from both players was startlingly high. So accurately and aggressively was Federer serving that the tension was heightened rather than alleviated as Murray performed a high wire act. Eventually, he fell off and the Swiss was able to take the set 7-5. It felt like a hammer blow but seemed to rally support in Murray’s favour.

The Scot, who had started so so positively, began to waiver. But as he did so, the volume of the support he received from the crowd grew. Yet he was still on that high wire, occasionally wobbling. And as the match drew to its inevitable conclusion, admiration for Federer trumped disappointment with Murray.

Much had been made, before the match, of the fact that Federer would be fresher, having spent significantly less time on the court than his younger opponent. And so it proved.

Center court seats at Wimbledon -- the stuff of dreams